One of the most commonly offered bits of advice concerning open loop water cooling for PC's is to always use the best possible loop components possible or severe consequences will follow.  This mentality compounded with the fact that the majority of builders who decide to do custom water cooling are using higher end components that are very expensive to replace, can create a somewhat paranoid mindset that reinforces the exclusion of all but the priciest parts options.

Several online tech personalities have dabbled with low cost water cooling products, but these experiments while providing some helpful information, have never been serious attempts to find a real-world solution that is an actual viable option for long-term use on high end gaming computers.  For the most part, these have been parody in nature or utilized some parts with critical flaws. In the end, the conclusions that are drawn reinforce the prevailing opinion. . . Do not do it!  I respectfully disagree and would like to argue my case.

Over the past couple of years, I have been building, experimenting, and learning about all types of gaming PC's and one of the funnest discoveries has been firing up a system under custom loop cooling and seeing silly-low temperatures across the CPU and GPU which allow for bigger overclocks that can extend all the way up to voltage limitations as opposed to thermal ones.  I would love to put that thrill within reach of the average gaming PC builder.

It is my belief that highly effective, reliable, expandable, and easily repairable custom loop water cooling can be done at a much lower cost than the majority opinion in the PC community.   It could even be characterized as "affordable". . . a word seldom if ever associated with custom water cooling.   After a lot of testing, I present here what I feel to be a META for putting together the cheap, Chinese water cooling loop. 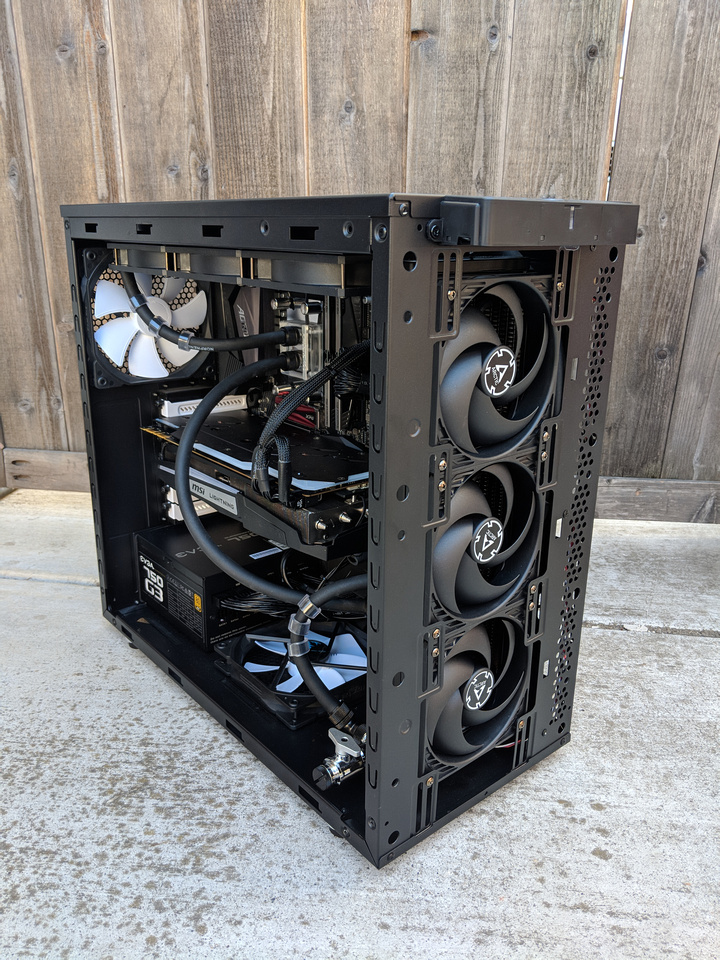 One of the great cost advantages of AMD's Ryzen CPU's is they all include a functional cooler.  Truth be told, almost any decent entry-level aftermarket cooler like the Coolermaster Hyper 212 EVO or even the $15 DeepCool Gammax 200T will match or outperform the stock Ryzen coolers here.  That being said, the 65 watt TDP Wraith Stealth cooler, which is the cheapest of the stack has a reputation for not leaving any thermal wiggle room beyond stock clock settings.  So, the Stealth is often left unused and floating around in the parts bin.  In this experiment, I will see if it is possible to stack two of these on top of each other to improve thermal performance. 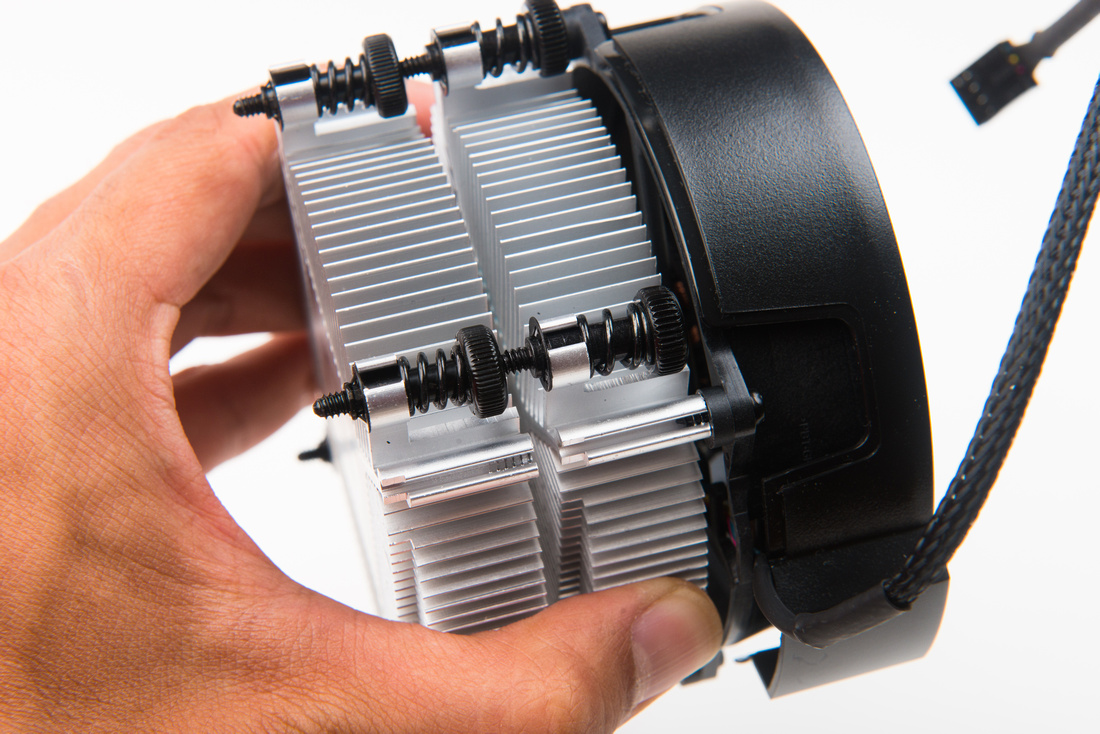 I recently acquired a Corsair SPEC-01 case and a Kraken X61 all in one liquid cooler in opened-package "new" condition.  I am nearly certain both of these items were store returns that somehow made their way into the hands of a distressed merchandise retailer and subsequently onto Craigslist where I found the case for $25 and the cooler for a cool $60.

When trolling for used PC parts deals, you often don't get to pick and choose the exact parts combinations for builds and have to figure out how to work with what luck brings your way.  Lucky for me, I think builds are much more interesting when the parts don't quite fit together without some hacking and creativity!

This is part 2 in my ongoing DIY sports lighting project and details assembling a 24V DC power supply for the battery charger.  Part 1 of the project can be found here.

Most of the higher power balance chargers for Lithium Polymer (Lipo) batteries require a separate DC power supply.  For our project, we will be using the Revolectrix Power Powerlab 8x2 which can charge at 40 amps per channel.  Feeding this beast requires either an expensive (~$300+) 2000 watt power supply, or a bit of DIY modification to some widely available computer server power supplies to adapt them to the task.  Being as the overall lighting system cost was already running out of control, I decided to adapt powerful and reliable Hewlett Packard DPS-1200FB server power supplies which are readily available used from $20-$30 each.

One of the main problems with playing beach volleyball and having a regular job of any kind is the obvious inability to play when the sun goes down.  While much of California boasts fantastically playable weather year-round, when the time changes and the days become short in the winter time, the sun sets around 5:00PM precluding most professionals from playing except on weekends.  I have often schemed in my mind searching for a way to right this injustice.

Given the widespread need for portable sports lighting, I was surprised at my inability to find any viable, cost-effective commercial products.  Recently, the appearance of a wide array of household and automotive LED lighting products got me thinking a viable DIY solution is possible.

In this series of posts, I will describe in detail how to build a battery powered, portable sports lighting system from readily available components.  While this system is designed specifically for beach volleyball, it can be adjusted and scaled for the technical requirements of other sports.  In this first introductory post, I will lay out my overall scheme and discuss some of the component choices that I made.  Subsequent articles will describe all of the modules in step by step build detail.

Because it was national soundcheck day "12-12-12", we went into the studio to get a few samples of our U87 clone microphone detailed previously. Figured I'd stir the pot a bit

Anyways, it was just acoustic guitars this time, but we were able to put a few mics up to compare. Among them, 2 original vintage U87's. We did not get the Klaus U87 up because our friend down the street who own it was having a pretty rough day. He had to put his dog down who he had been walking for near 20 years, so it was all-in-all a bad day to be borrowing mics.

Time for another round of studio tests.  I have been working on a developing variety of microphone projects lately and have come to discover that good, actionable information about various microphone components is actually quite scarce on the internet.  Usually tiny gems of data are scattered all over the internet and buried hundreds of posts deep in often un-related web forum topics.  To compound the problem, egos, chest thumping, marketing hype, "trade-secrets", and general online drama often cloud discussions or turn into useless drivel.

Also, due to the infinite range of recording environments and monitoring systems, the often-provided lone audio sample can only describe a condition to a certain extent.  One mic is "open". . . well, compared to what?  Another one could be "opener".  Because of this,  I have found relative data to be more helpful, but that requires repetitive, structuring testing in a reasonably controlled way different from regular music production.  Even then,  concrete conclusions are hard to find and it is difficult to establish a "baseline", but in the end, these devices must be judged and improved by listening and meaningful comparison.  So, even if messy and imperfect, we must try.

With that as a framework, I entered the studio earlier today with a trunk full of DIY microphones and prototypes to test and attempt to provide some actionable information for people looking to build recording microphones.

More after the jump.